Muse released a new music video this morning for their newest song “Pressure”, the latest to be released from their next album Simulation Theory.

Simulation Theory is out November 9. 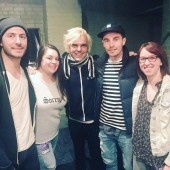